Table of Contents in the Back Okayed by Amazon

When Amazon changed KDP Select to a pay-per-page-read model in July of 2015, it was inevitable that some scammers would try to game the system. There were a group of wise guys with a remarkably unsophisticated scheme of publishing books through KDP Select filled with random content pulled from the internet. In the front they would have a link to a “contest” that would be an internal hyperlink to the back of the book. Amazon would then count the entire book as “pages read” and subsequently pay out as royalties via KDP Select. Selena Kitt has all the details of the scam.

In February 2016, Amazon adjusted the algorithm used to tabulate pages read and total page count of an eBook with KENCP 2.0. This apparently did not defeat this scam. Last week, Amazon took the strange approach of flagging eBooks with Table of Contents in the back as implicitly taking part in this scam. Many authors who had Table of Contents in the rear were served the dreaded Amazon quality notices and others even had their buy buttons removed. Waaaatttt? David Guaghran has a great write-up of all this.

Where Should a Table of Contents Go?

While Table of Contents (ToC) aren’t normally present in the print editions of novels, they have long been required for eBooks (both HTML, NCX, and a nav ToC if EPUB3). Jaye Manus talks in great detail about the importance of the ToC. BB eBooks tends to follow the Chicago Manual of Style convention for front/back matter practices and places the HTML Table of Contents in the front matter. However, many authors prefer to place the HTML ToC in the back matter to avoid taking up too much space in the free eBook samples that many vendors offer. For clients, BB eBooks is happy to place the HTML Table of Contents anywhere preferred: about 15% of our clients prefer the Table of Contents in the back of the eBook. Many heavy-hitters in the Indie community recommend the ToC be placed in the back to improve sampling.

We received numerous emails from clients rightfully concerned about having their Table of Contents in back. However, none of our clients had their eBook quality noticed (luckily). After some pressure from the indie publishing community, Amazon finally responded about this issue—believe it or not. The post from KDP is here:

In many cases, putting a book’s Table of Contents (TOC) at the end of a book can create a poor experience for readers, and in general we suggest authors locate TOCs to the beginning of a book. If the formatting of a book results in a poor experience or genuine reader confusion, or is designed to unnaturally inflate sales or pages read, we will take action to remove titles and protect readers. That said, absent any other issues of quality, locating the TOC at the end of a book is not in itself outside of our guidelines.

Thankfully, it looks like Amazon will no longer be removing eBooks that have its Table of Contents in the rear; however, we will continue to monitor.

Kindle Unlimited is a program created by Amazon in July 2014 to compete in the subscription eBook market. For independent publishers, it required that they enroll their book in KDP Select, which means the eBook can only be published at Amazon. The ethical implications of Amazon being the only channel to sell an eBook have been much discussed. The subscription service appears to be doing well and some authors have had tremendous success under the KU model. Additionally, the main competitor in the subscription eBook model, Oyster, has gone out of business.

In July of 2015, Amazon adjusted the royalty payout for eBooks enrolled in Kindle Unlimited from a per-book to a per-page basis. This was a good deal for authors who write longer novels and enroll them in Kindle Unlimited, but a bad deal for authors who pen novellas and short stories. The payout-per-page-read started out slightly above half a cent, but declined as 2015 went on. Below is a snapshot of payout-per-page-read for 2015:

Amazon doesn’t release an official payout-per-page, but it appears to be hovering around 0.45 cents/page currently. It is disappointing that this number has declined so much.

Please Note: You can view the KENPC for your eBook under KDP Dashboard > Promote and Advertise.

As you know, “page count” in an eBook is arbitrary in a reflowable eBook, and can change based on the reader’s preferences (font face, font size, device size, etc.) In July 2015 when Amazon went to a per-page royalty payout, Amazon used an algorithm called KENPC (Kindle Edition Normalized Page Count) to tabulate the page count. The KENPC page count should not be confused with the print page count of a book, which can vary depending on a number of factors. They claimed that the page count was independent of any formatting characteristics, but making the font and line spacing bigger actually did increase the KENPC due to a flaw in the algorithm. The KENPC, under the original algorithm in July 2015 was approximately 170-180 words/page.

In early February 2016, Amazon updated the algorithm to KENPC 2.0. Based on this algorithm, authors are reporting their KENPC dropping, no matter what formatting techniques used in the eBook. Based on some testing, we estimate the new KENPC tabulates ~190-200 words/page. Additionally, the KENPC is capped at 3,000 pages, so large multi-author box sets may not be the big revenue generators they once were. Based on the fact that Amazon is tabulating lower page counts, offers lower payout on pages read, and is clipping back matter with the “Before You Go” page, it is advised that independent authors and small presses seriously consider whether Kindle Unlimited is a good deal for them.

Amazon’s Dreaded Before You Go page

We have discussed before the importance of having promotional back matter as a way to market your other books, newsletter, and social media links to your captive audience. Additionally, you can add affiliate links to earn a few extra bucks when you are linking to online retailers. This is especially important for indie authors who have a large back list so that they can maintain a steady income. Amazon is the world’s largest eBook market, so having promotional back matter in your Kindle edition is crucial toward a viable income.

For quite some time, Amazon would place a “Before You Go” pop-up on certain apps and devices (iPads, Kindle Fires, and Kindle e-ink readers to name a few) that allows the user to click on a review button, see other books from the author, and see recommended reads. This pop-up occurred after the very last bit of content in the eBook. The content in the pop-up is completely controlled by Amazon and not by anything you can choose on your KDP page or during formatting of the eBook. Below is an example from the Kindle iPad app for a book on Buddhism: 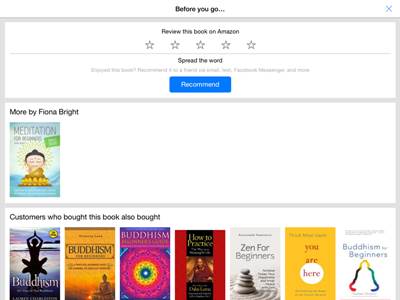 Unfortunately, sometime last year, Amazon decided to start placing the “Before You Go” pop-up before the author’s back matter started. The consequence of the premature pop-up is that the reader thinks the book is over and that there is no back matter in the eBook. This has obviously caused widespread loathing among indie authors who depend upon the back matter in their eBooks to generate more sales.

Amazon offers no documentation on the criteria of where they place this annoying pop-up, and angry emails to KDP customer support will not yield satisfactory results.

How to Trick Amazon

BB eBooks cannot control what Amazon does after the MOBI/KF8 file is uploaded through KDP; however, we were able to do some trial and error testing on some of our clients’ books to see what was triggering the pop-up. We discovered the following: 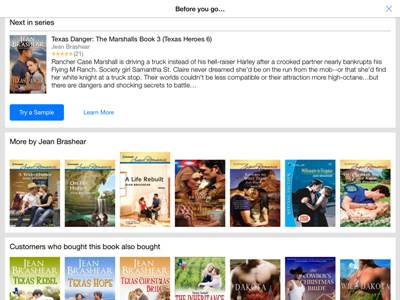 To correct this, BB eBooks made another one of her Kindle books, with identical back matter, have no page breaks between the end of the book and the entire back matter. Jean re-uploaded through Kindle Direct Publishing and the revised edition did not have the pop-up until the very last page of back matter. Therefore, our conclusion is that not having any page breaks in the back matter will avoid the problem with Amazon forcing the premature pop-up.

Disclaimer: Amazon could change their undocumented criteria anytime on where they place the pop-up, and BB eBooks does not guarantee that the pop-up will appear at the very end without page breaks.

Get a Quote Today

Please contact BB eBooks for a no-obligation quote on your book.
Get a Quote

Please sign up for the BB eBooks newsletter to receive tips on formatting, marketing, and the industry.

g
Subscribe to the BB eBooks RSS Feed to stay informed of all things eBook.

The eBook Design and Development Guide

Learn how to design, develop, and create an eBook like a pro for all markets. Available at Amazon for $6.99.

Front Matter, Back Matter, and Metadata

A useful resource guide to make your novel or non-fiction work more professional. Available at Amazon, Google Play, and Smashwords for free.